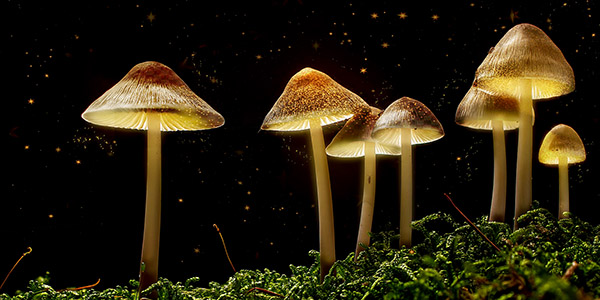 Psilocybin is one of the active psychoactive substance in a group of mushrooms called Psilocybin mushrooms. These are commonly called ‘magic mushrooms’ or ‘shrooms’.

Psilocybin mushrooms contain a mixture of Psilocybin and Psilocin. When ingested, Psilocybin is metabolised to psilocin, which is responsible for the psychedelic properties of these mushrooms.

The effects include hallucinations (visual and auditory) as well as changes in emotional state. Some people experience an altered sense of time and space. Colours are typically enhanced, and sounds may be more intense. A fusion of senses (synaesthesia) can occur where sounds may trigger colours, or vice versa.

The first author of the study was Dr Alan Davis and the study was done at the Center for Psychedelic and Consciousness Research, in Baltimore, USA.1

What kind of study was it?

It was a randomised, controlled trial comparing psilocybin-assisted therapy with a waiting list control. This means that those in the control group had no active intervention and were simply on a waiting list for treatment.

The study took place over 8 weeks and those in the active intervention group had to attend at least 18 in-person visits.

The study randomised participants to have immediate treatment, or to start treatment after 8 weeks (waiting list control).

The intervention group had two treatment sessions with psilocybin (given orally), alongside approximately 11 hours of supportive psychotherapy.

How many people were involved?

Interestingly, 870 people were assessed for eligibility, and 800 were excluded. The most common reasons included: currently on antidepressant medication (N=157); and living too far away to attend (N=161).

What were the main outcome measures?

All participants were screened using structured assessments, including personality assessments. The primary outcome was the GRID-HAMD,2 which is a structured interview for the 17-item Hamilton Depression Rating Scale that separates out the frequency of symptom from its severity and improves reliability by incorporating consensus definitions for the ratings.

The GRID-HAMD was completed over the telephone by raters who were blinded to the group that the participant was in. Ratings were done at baseline, and at weeks 5 and 8.

Demographics of the participants

Around two-thirds (67%) of participants were female. Just under two-thirds (58%) had a bachelor’s degree and around one-in-six (17%) had a master’s degree. Two participants (8%) had an advanced degree. Most people being treated in secondary care in the UK do not look like this.

About half (46%) were married and 63% were in full-time education, with 17% in part-time education. Only 21% were unemployed. This is probably rather different to the kinds of patients seen by psychiatrists in secondary care mental health services where unemployment is much more common.

One of the exclusion criteria was a history of a “medically significant suicide attempt.” Whilst this is not defined, it is likely that anyone who has required medical treatment for an overdose or attempted suicide would have been excluded. Such a history is common in patients being seen in the UK by mental health services.

How unwell were the participants?

The baseline HAM-D score for the group was 22.8 ± 3.9. This puts them in the category of ‘moderate depression’ according to commonly-used conventions.8

The table below shows outcomes on the primary outcome measure, the GRID-HAMD.

The authors reported that similar reductions were seen on other measures of depression and anxiety, and the tables in the supplementary content show minimal/ no change in the delayed treatment group and marked reductions in the immediate treatment group.

Does this demonstrate that psilocybin is effective for treatment-resistant depression?

Not necessarily. There are a number of factors that we need to take into account.

Will we see this being used in the UK?

Probably not. They had to screen around 800 people in order to identify 27 participants. Many were excluded because they were on medication or had a family history of significant psychiatric illness.

The study was conducted in people who were not taking antidepressants. This would be uncommon in the kinds of patients where specialist treatments might be used. It is unlikely that we will see GPs providing psilocybin in primary care.

It is widely believed that inactive control groups favour the intervention in psychotherapy research, and there is some evidence that waiting list control groups may act as a ‘nocebo’ condition.13 A nocebo is when a patient’s negative expectations cause an apparently inert treatment to have a more negative effect. It can occur in drug trials when someone is receiving a placebo, and it can probably occur when people do not get allocated to the active intervention group in psychotherapy trials.

Findings from other research

This is not the first study exploring the use of psilocybin for treating depression.

There are a number of small studies using a single dose of Ayahuasca, an Amazonian hallucinogenic drink. In small, non-randomised, and uncontrolled studies large improvements in depressive symptoms have been reported up to three weeks after a single dose.14, 15

Open-label studies of Psilocybin in treatment-resistant depression have also been reported.16 In most cases, psilocybin has been used alongside some form of therapy.

In a systematic review conducted in 2016, the authors concluded that: “Whilst all of the included studies have methodological shortcomings, of 423 individuals in 19 studies, 335 (79.2%) showed clinician-judged improvement after treatment with psychedelics…The evidence overall strongly suggests that psychedelics should be re-examined in modern clinical trials for their use in unipolar mood disorders and other non-psychotic mental health conditions.” 17

Whilst the findings from this research are interesting, there are still many questions that remain unanswered in connection with whether psychedelic treatments might be helpful for depression.

It is also relevant that Psilocybin is a Schedule 1 drug under the Misuse of Drugs Act 1971 in the UK, despite it appearing generally safe. This presents major barriers to its use in routine clinical care. There are compelling arguments that some of these classifications are rather antiquated; particularly when it comes to the use of novel psychoactive substances for research and therapeutic use.18