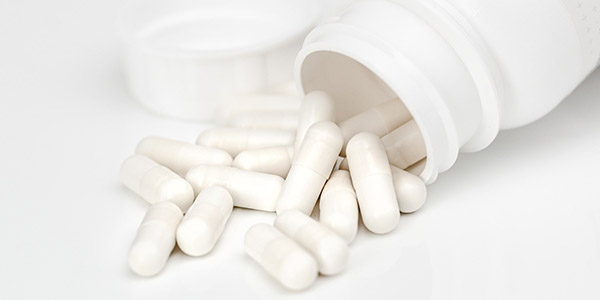 N-acetylcysteine is thought to regulate glutamate neurotransmission in the brain, and also acts as a potential anti-oxidant. It increases the amount of extracellular glutamate by enhancing the activity of the cystine/glutamate transporter.

There are a number of other drugs that are sometimes used to treat OCD that act on glutamate. These include: Memantine; Riluzole, D-cycloserine; and lamotrigine. Summaries of these other drugs will hopefully follow in time.

The possible mechanism of action is unknown, but there is evidence that glutamate is involved in development of the symptoms of obsessive-compulsive disorder (OCD).1-3 Of course, glutamate is the main 'excitatory' neurotransmitter in the brain, so it is likely to be involved in all neural processes to some extent.

Parts of the brain that are likely to be involved in the development of OCD (such as the striatum, parts of the basal ganglia, and some of the cortico-striatral-thalamo-cortical circuits) have large amounts of excitatory (i.e. glutamatergic) input relating to information about movements and sensory integration. It is possible that this large amount of glutamatergic input puts these parts of the brain at risk of becoming dysregulated, with overstimulation of extra-synaptic glutamate receptors.

This is not a systematic review, but is based around a review of what information is available. It is intended to provide an overview of what the evidence would support in terms of treatment. Only randomised, controlled studies (RCTs) have been included.

In one study,4 data had to be extracted using WebPlotDigitizer.5

Six RCTs of N-Acetylcysteine have been included.4, 6-10 A summary of these trials is given below in Table 1. The studies are sorted by year (earliest first). You can download this summary in MS Excel format here.

Forest plots, showing the estimated results from each study along with the overall results, are shown below. Groups have been defined by whether they were in adults or children/ adolescents. Click on the image for a larger version.

Overall, there was a slight positive effect for NAC vs placebo, but the effect was very much less in adult vs adolescent populations. Excluding the two studies in adolescents resulted in a non-significant overall effect for NAC.

It should be recognised that 3/4 of the adult studies were not statistically significant. Removing the single positive study (Afshar et al, 2012) removes any effect for NAC.

If N-Acetylcysteine (NAC) has an effect, it is likely to be small and only evident in adolescents. There is no convincing effect for NAC in adults.

The observation that the first trial conducted (in 2012) is positive, whilst successive trials (2015-2020) are negative, is commonly seen in science.

The majority of studies included individuals who were not especially severe. The non-weighted average baseline Y-BOCS across all studies was 24.8, and in adult populations only it was 26.6. This is broadly similar to most other trials of psychological/ drug treatment for OCD.

In general, tolerability of N-Acetylcysteine was good. In most studies, there were no significant differences between the NAC group and the placebo group. The most common adverse effects include: nausea; changes in bowel habit; and headache. Most side effects tend to be mild and few studies had high numbers of drop-outs. It often has an unpleasant smell that can make it difficult to take.

N-Acetylcysteine can be found in health-food shops and is typically around £8-10 for 30 capsules at a dose of 600mg. This means that in order to get up to the typical doses used in the studies, 30 capsules will last you about one week.

Overall, it is likely to be safe for most adults but it is unlikely to have a clinically-significant benefit; particularly in those with more severe symptoms and those who have not responded to at least one or two previous treatments. However, some people may wish to try it given its ‘health food’ status and its good tolerability.

[Please note that all links will open in new window.]